Where Valentine’s Day comes from

I was looking at the calendar this week and noticed that there’s a heart drawn on next month – here comes Valentine’s Day. So, as I was planning something for this year’s 24 hours of love, I got to thinking: where did this ‘Day of Love’ come from? These days we are running around spending tons of money on cards, flowers, candy, jewelry, and dinners to please the ones we love, but does anyone even know where Valentine’s Day came from? Do you know the story behind Valentine’s Day?

We all know that February has long been celebrated as a month of romance, love, and St. Valentine’s Day, as we know it today. But did you know that it contains vestiges of both Christian and ancient Rome tradition? Who was Saint Valentine, and how did he become associated with this holiday? What in the world was Lupercalia and how did this insane event turn into the day of love? If you’re as oddly curious as I am, I hope you get a kick out of reading this post! 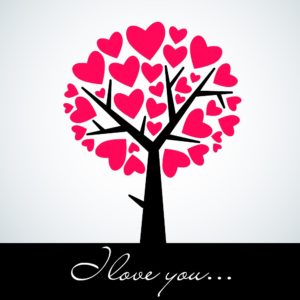 Valentine was a Christian priest who served in the Roman Church during the third century; Valentine defied the Roman laws when Emperor Claudius II prohibited the marriage of young people. The Emperor did this based on the theory that married soldiers would be worried about their wives and/or children in the event of their death, because of this, it was believed that unmarried soldiers obviously fought better than married soldiers. This immediately presented a problem with the Christian Church. Obviously, the Church believed marriage was sacred between a man and a woman, so marriage between lovers was highly encouraged. Valentine, seeing the injustice of the new Roman decree, defied Claudius and continued to perform marriages for the young lovers in secret. The Priest Valentine was eventually caught for performing marriage ceremonies against the command of the Emperor. Valentine was then imprisoned and tortured for this act of “defiance”.

Legend has it that a man named Asterius, known as a judge (or jailer – unknown) at the time of Valentine’s imprisonment had a blind daughter with whom Valentine prayed with. Valentine prayed with such astonishing effects to heal her that Asterius, her father, himself became a Christian man. It is believed that Valentine himself found love for this young woman while he was imprisoned. She would visit him often and it was understood that this feeling of admiration and love was mutual.

In the year 278 AD, an estimated 9 years after imprisonment, Valentine was sentenced to death for his rebellion against the Emperor. The story goes that the last words he wrote were in a note to this young woman professing his love and signing it, “from your Valentine,” creating an expression that is still widely used today. Although the truth behind the Valentine legends is unsure, all the stories emphasize his appeal as a romantic figure for his and many others’ loves. Valentine’s martyrdom has not gone unnoticed, Valentine has come to be known as the patron saint of lovers.
​
In other news, Saint Valentine’s story may not be the story that creates our beloved Valentine’s Day traditions. While some believe that Valentine’s Day is celebrated in the middle of February to commemorate the death of Valentine, others claim the Christian church placed St. Valentine’s Day in the middle of February as an effort to “Christianize” the pagan fertility festivity of Lupercalia.
​
Lupercalia, starting around 494 AD, would commence with members of the Luperci (an order of Roman priests) would gather at the sacred cave where Romulus and Remus, the founders of Rome, were believed to have been raised by a lupa (female wolf). The priests would sacrifice a goat for fertility, and a dog for purification. They peel the goat’s hide into strips and soak them in the sacrificial dog blood.  Then they took the hide strips into town to beat the young women with as a whip. However, the young women welcomed the slap of the hides because it was said to make them fertile. Later that day, all the young women would put their names in a big pot and the single men would each pick a name from the urn. This action paired the man and woman together for the next year for mating. These matches often ended in love and marriage.

Lupercalia survived the initial rise of Christianity in Rome but was deemed “un-Christian” at the end of the 5th century and was outlawed. Pope Gelasius declared February 14th to be St. Valentine’s Day shortly after this occurrence.
Believe it or not, there are many other rumored reasons for Valentine’s Day being February 14th. During the Middle Ages, in England and France, it was believed that February 14th was the first day of bird mating season, this has been said to contribute to the idea that the middle of February should be named as a day for romance.

The British Library in London still houses the oldest valentine in existence, it is a poem that was composed in 1415 by Charles Duke of Orleans written to his wife and sent while he was imprisoned inside the Tower of London. However, the exchange of Valentines in America probably started around the early 1700s.

In the 1900’s printed cards started to replace handwritten letters due to printing technology. Today, in U.S. alone there is an estimated 1 billion Valentine’s Day cards purchased every year. This number makes Valentine’s Day the second largest holiday to purchase cards. This number is only to be outnumbered by Christmas cards which are estimated at 2.6 billion every year. We love our cards!
​
Interesting information on where Valentine’s Day came from. The stories out there vary from time to time but with looking back into our history, this is how it tends to go. I hope you have enjoyed this tidbit of information, I know that I will now take all of this in account while I am deciding how to spend my Valentines Day. What is YOUR story behind Valentine’s Day?